I Am Not Supposed to Bad Mouth an Incumbent IT Support Company or Existing Vendor, Right?

But what happens when something that another IT provider, or vendor, does is so not aligned with “best practices” that it makes me shudder? What if their actions could cause a serious problem at the client’s (or prospect’s) site that might have otherwise been avoided? Couldn’t I then be forgiven if I mentioned that the other guy’s effort was misguided?

I guess it depends on the circumstances.

I encountered two instances of less than stellar computer infrastructure design in the early part of June, and my frustration was significantly higher than that expressed by the folks who were affected. Could I not be forgiven if I said, “Well, you know, those guys really messed up here, but I have a way to fix it.”

But I can’t explicitly say that because I don’t always know the kind of relationship the client (or prospect) has with that vendor or IT company. Instead, I’m usually turning things around by saying something like, “Well that’s not how I do things, because after 10 years in business, I’ve learned that this approach —whatever this is — works much better.”

Of course finding the appropriate solutions to a client’s – or a prospect’s – problems is the core of my business. The tag line for Heliotropic Systems has been “Computer Systems Analysis & Design” for more than 20 years. My goal is to design and deploy computer and network hardware and software with the understanding that it is supposed to operate properly, based on the client’s requirements. In my very parochial way of thinking, I guess that’s pretty much what anyone would want, never mind expect.

So let’s take the first case. I received an email from a client that some of the video monitors at the site were not displaying the cameras. Overnight I had received alerts from their Uninterruptible Power Supply (UPS) systems that indicated there had been electrical disturbances from 1:20 to 1:25 in the morning. I responded to the client’s email with that information, and then went to take a look at the camera closet to see what was going on.

I found that the cameras and all of the related hardware were plugged into only two UPS devices. One of those devices was absolutely dead (it did not power on). Now most of you know that I’m a huge proponent of UPS devices because they can protect equipment from fast changes in the electrical environment. I also point out to everyone to whom I sell these devices that they come with two “bands” — one that provides only protection and another that provides battery back-up plus surge protection. Your important equipment is supposed to be plugged into that second band.

You can imagine my surprise when I found all of the hardware was plugged into both bands on each of those UPS devices. That means that some of the equipment was protected properly while some was not. It appears that one of the UPS devices simply couldn’t handle the stress of the electronic interference. In other words, it did its job and sacrificed itself rather than letting the hardware get damaged.

The cost of the camera implementation was in the low five-figure range, so I had to wonder:

I can’t answer these questions; only they can. And because they are not my client, I am not in a position to ask. What I do know is that it certainly would not be the way that I would have set up those UPS devices.

To further confound the issue, one of the vendor’s technicians arrived late in the day and told me afterwards that he had replaced the battery in the affected unit. He said, “I had to unplug everything and then made sure to put the cameras back on the surge side.” Curious, I asked why he did it that way. He responded, “Because that side will continue to work even if the battery doesn’t.” I quickly turned away to hide my shock and the fact that I bit my tongue so hard I was bleeding.

So now if the site experiences a similar power fluctuation, that “pesky battery” won’t be in the way to do its job. In all likelihood, the camera systems will be adversely affected by the electrical problems — just the thing a UPS is designed to avoid.

The second case is where I was called in to assist someone who was in dire computing straits. I won’t go into the details, but in this particular professional services office, I was pointed to what the prospect referred to as his server. I walked over to a corner and saw a mess of wires and hardware on the floor in front of the computer. Oddly enough there were Post-It notes on the hardware to identify the components. A picture of this scene appears below. 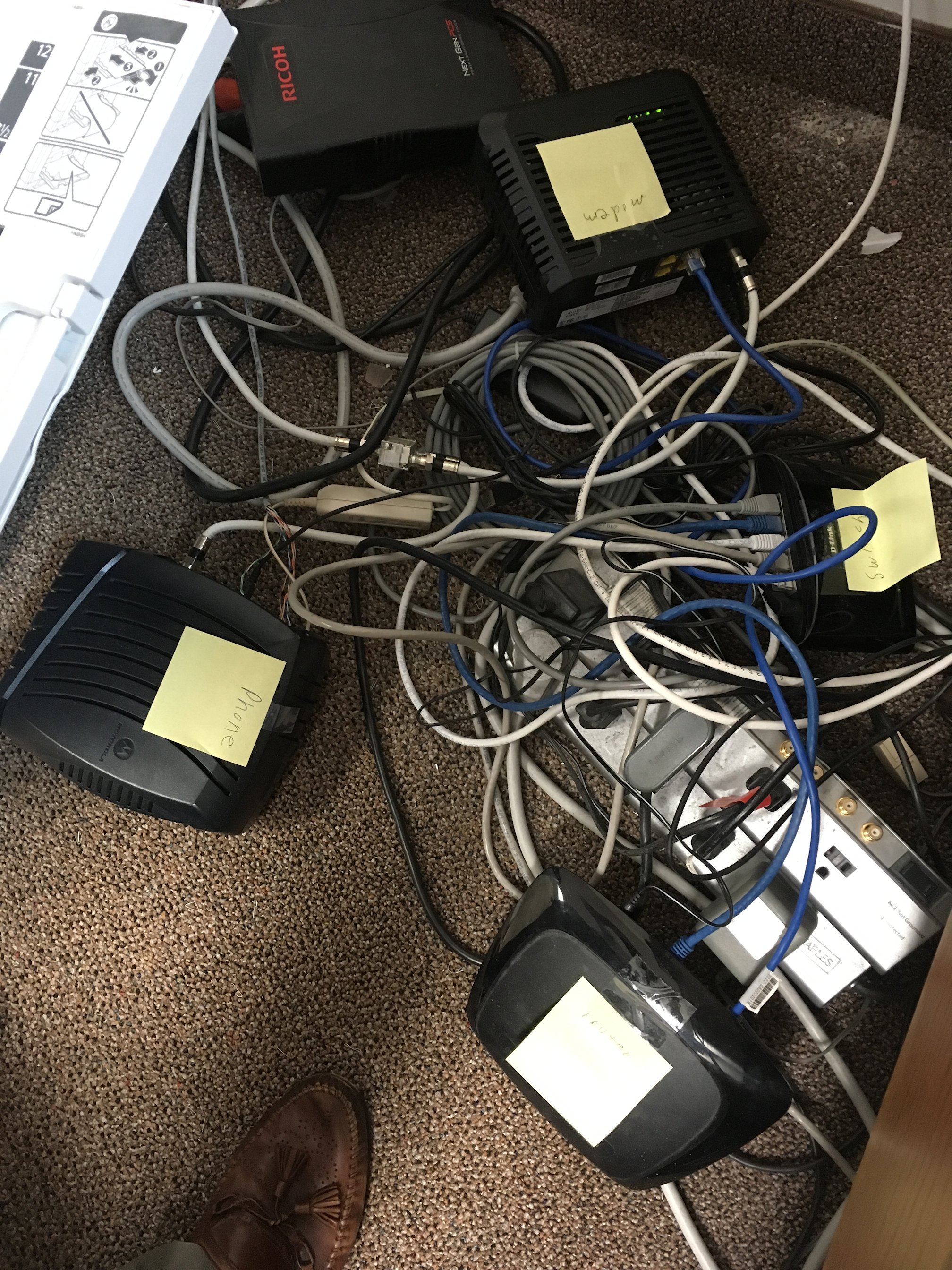 After I got over my initial amazement, I took a look at the server and had to shake my head to clear it. The “server” was nothing more than a Windows 7 computer; it was most assuredly not a server.

Later that day I had a brief phone call with the IT support guy and he acknowledged the server was merely a souped-up desktop computer. For his client’s sake he called it a server, because it was functioning as a file server. I understand that some people shy away from learning about technology and that as an IT solutions provider I want to make them comfortable. But to my way of thinking, a client who is under the impression that a standard desktop computer is a file server is not being educated properly — and educating clients is part and parcel of my business.

What I couldn’t understand was how anyone — with any sense of professionalism — would have permitted that mess of wires and hardware to have been placed on the floor in the first place. Good grief! Is an office manager explicitly telling the cleaning staff not to vacuum that area because they’ll disrupt the internet? What if there is someone new on the cleaning staff and they didn’t get the word? One inadvertent push of the vacuum cleaner, and then it’s goodbye network.

It would have taken all of 30 minutes to have set this up properly. You put the devices on one or two shelves. You use adhesive plastic labels to identify the components. You connect the devices to a UPS (not the silver surge protector). Finally you run the wires (and tie them up) to avoid the spaghetti. What IT solutions provider doesn’t have 30 minutes to make a client’s site look better than this?

Do I even tell the prospect that this is unacceptable behavior? Do I suggest that he has been working with someone that has exhibited questionable behavior? I mean, if this is how this IT guy treats networking equipment, do I ask the prospect what kind of maintenance and monitoring is he has on the office computers?

Well, I found out. The prospect told me the other IT guy replaced a hard drive in the file server in December 2018; and that’s pretty much when the back-up software stopped working. (That fact came to light in June 2019.) Seriously?!? Who doesn’t make sure after fixing the hardware on a computer that everything that was working before any work was started is also working after the work has been completed? Why wasn’t that a checklist item? Why wasn’t that confirmed? I simply do not know.

But it gets worse. This IT support technician used consumer-based and free antivirus software on business computers that their client used to handle personal information about other people. In this day and age of rampant data breaches and ransomware, why were not more stringent security safeguards implemented? Again, I simply do not know. For years I have extolled the absolute folly of that approach. And it is clear that the lack of security had caused a major problem for this prospect. He acknowledged that there was a need for something better. It’s just a shame the IT guy who was providing support wasn’t proactive, and professional, enough to do that for him.

Think I’m still upset now, more than two weeks later? You have no idea how I felt at the time. I was just about to launch a tirade to this prospect to “wake up, it’s not playtime in the office!” But no, I gently demurred and said, “You know, each IT solutions provider has his or her own ways of doing things.” At the same time I was thinking (quite loudly, mind you), “But believe me, I, sure as [expletive], don’t work that way!”

Posted in: Everyone, Small business