You are browsing the site archives by month.
12Apr 2018

Manufacturer redefines a word, but it’s not for the better

I received a phone call from a major distributor earlier this week asking me if I knew about a new line of laptops issued by the electronics giant LG. I admitted that I was a Lenovo partner, and was partial to their offerings, but I was interested in seeing what the competition had available.

A short while later I received the email, the bulk of which is shown below. 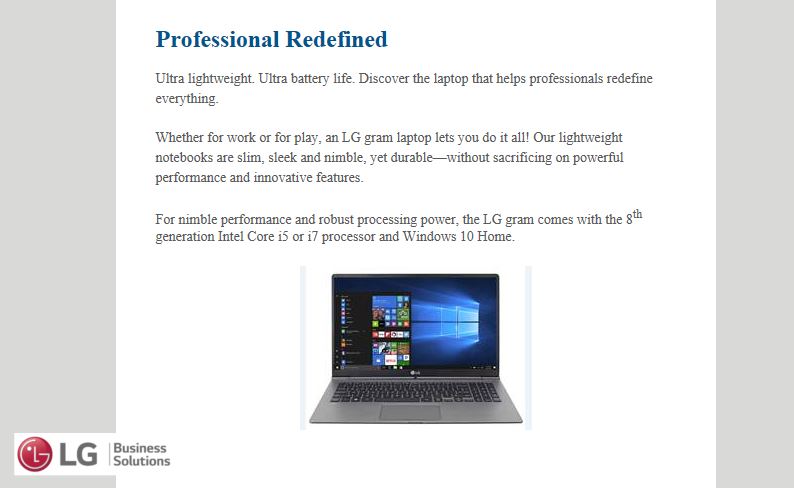 At first I was intrigued, because it looked like it was going to be a light-weight model that could be useful for some road warriors. That is until I got to the last word of the text, and I stopped short. In my head I heard the cartoon sound of tires screeching to a stop.

I then re-read the title, “Professional Redefined.” At that point I was horrified because of the dissonance in the ad copy.

If “professional redefined” means using consumer-based products in a business environment, I am absolutely and totally against it.

I am a managed services provider (MSP), and I sell IT support services to small businesses.

One of the main points I make as an MSP is that a business must use business-class (or even enterprise-class) products, because they are designed to be properly managed, provide greater security, and offer additional features used by businesses.

Windows 10 Home does not fit in those categories at all.

I cannot, in good conscience, even consider these devices for my clients.  But now I’m wondering how much grief this LG marketing campaign is going to cause other MSPs who will have to tell their clients, “No, I’m sorry, it looks nice and shiny, but it isn’t suitable for your office.”

And no offense to LG, but if you are going to redefine the word “professional,” I would hope – very sincerely – that you would aim for something higher up on the scale, instead of lower.

Thanks and safe computing!

I Am All For Security, But I Do Not Like When It Hides From Me

A security-based newsletter entered my Inbox Tuesday afternoon and, like a gerbil, I immediately clicked it open to see what kind of shenanigans were going on in the world of cybersecurity.  You can imagine how intrigued I was at the following title:  “Chrome Is Scanning Files on Your Computer, and People Are Freaking Out.”

Well, that certainly got my attention, and I clicked on the link to read the article at Motherboard, and a lot of the associated links, and those associated stories and their links, and before I knew it, more than 30 minutes had gone by – and my jaw was just as slack at the end of that adventure as it was at the start.

I’m going to give you the “Reader’s Digest” version because I don’t know if many of you are going to read that.

Let’s start with the basics.  Google Chrome is a browser, just like Microsoft’s Internet Explorer, and Mozilla’s Firefox, and Apple’s Safari.  The browser lets you explore the pages on the World Wide Web.

The focus of this article is that deep within the Google Chrome settings, there is a ‘clean up’ option that uses a third-party product (from antivirus vendor ESET) to scan for malware that could, potentially, harm the Chrome browser itself.

One of the parameters associated with this option, “Report details to Google,” is defined as follows: “Includes information about harmful software, system settings, and processes on your computer.”  And the default for this setting is to ALWAYS SEND the data to Google!  Obviously, this setting lets Google’s developers know how to handle any problems that may have been encountered during the scan.

Now that’d be great if Chrome simply scanned a few known locations in which malware frequently appears and then closed down.

Unfortunately, as the reporter describes it, the scanner reached further into the computer than anyone would have suspected, and it was going through the My Documents folder.  I can’t imagine that any malicious software would reside there that could cause any harm to the browser.  So that’s just overkill.  The exaggerated claim is that Google is spying on you, your files, and your computer.

According to a leading Google developer, the scanner “only runs weekly, it only has normal user privileges (meaning it can’t go too deep into the system), is “sandboxed” (meaning its code is isolated from other programs), and users have to explicitly click” on a box if anything is detected.

Like I said, this is the first time I’m hearing about this.  But the text of the “agreement” you have with Google when using Chrome can be found here: https://www.google.com/chrome/browser/privacy/whitepaper.html#unwantedsoftware

I looked into this, and it seems that this clean up “feature” has been in existence for more than a year, and is only now getting any reaction.  But that’s the wonderful nature of the Twitter universe.  Someone makes a discovery; some of her followers take a closer look and get agitated; a reporter asks a few questions, and then everyone gets all riled up about the intrusive nature of a global corporation.

I doubt that any of my clients who have Chrome have EVER seen a pop-up that malware was found.  And I know that many of you use Chrome and that some of you have encountered instances of malware.  It’s simply that the software I have installed on your computers scans more frequently than once a week, is constantly updated, and – most importantly –I monitor the results (not Google!).

While I would want everyone to turn off the setting that sends data to Google, the steps I have followed do not work for more than the logged on session.  If you close your browser and then re-open it, the setting turns itself on again.  I have checked, and it seems that this setting simply cannot be eliminated.

What’s my recommendation:  If you don’t mind having your machine bogged down every now and then by a scanner over which you (and I) have no control, you can continue to use Chrome.  But I would really like to know if you ever get a pop-up from Google about malware.  Otherwise, if you’d prefer a less intrusive browser, send me an email or give me a call and I’ll install Firefox and transfer your favorites.

Thanks and safe computing!