You are browsing the site archives by month.
15Sep 2017

I think that I know my client base well enough to know that the majority of you don’t use Twitter, although you probably do know someone who does (no, I don’t mean that guy who seems to be in the news every day for his posts). Unfortunately, what is happening now with that venue is getting out of control.

In the past few weeks if someone in politics, or in the news media, tweets something that is antithetical to another group’s beliefs, that person’s inbox will be filled to the brim immediately with targeted opposition posts. There are these things called “bots” (short for robots) that are now spewing out antagonist tweets at an unprecedented rate. And they are using Twitter to attempt to change the course of political and social discussions.

We all realize now that the 2016 presidential race was subject to Russian cyber-meddling. Some analysts say that the recent ferocity of the latest assaults is but a mere preview of what could be coming in the 2018 elections. The purpose of these bots is to sow discord, and so far, they are succeeding. While top Russian officials have repeatedly rejected accusations of meddling, the top U.S. intelligence agencies are telling us otherwise.

I’ll certainly bet you never thought the information you got on your mobile device came from a robot programmed to serve up garbage, but it is happening. And now, more than ever before, you now have to question the integrity of the information that you receive. On the one hand, ever since the election Twitter has taken steps to counter false news and kill off fake accounts. On the other, unfortunately, the bots are also getting savvier at dodging detection.

Another AOL Bit of Idiocy

A client called in on my support phone earlier this afternoon and told me that she had a “Microsoft System Security Alert” screen that was talking to her and that she couldn’t do anything with her computer.

I launched a remote session, and by using the Windows Task Manager I quickly ended the Internet Explorer applications that were running. It was a fast and easy fix for a really stupid problem.

I was extremely grateful that this particular home user called me, instead of the 800 number that was on the bogus alert screen (shown below). But my relief was short lived. 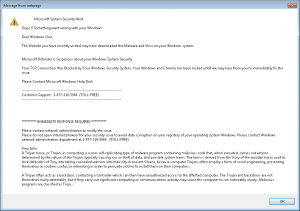 A few minutes later she was back on the phone saying the fraudulent alert was on her computer again. I killed it and ran a scan with Malwarebytes, which turned up nothing.

I reassured her that everything was fine.

When she called a third time, I had to ask what it was she was doing – so she showed me. She launched Internet Explorer and it opened on AOL’s home page. She told me she wanted to go to Amazon to check on a book. And she did so using the AOL Search bar and typing in Amazon.

On the resulting page AOL search results list (shown below), she clicked on the first link that was displayed. I finally understood exactly what was going on. 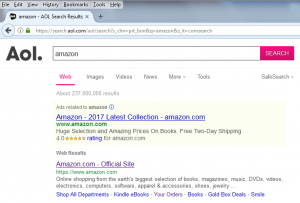 You see, that is a sponsored advertisement, meaning some organization paid AOL money to highlight their “product” based on a search. Underneath that is, in fact, Amazon’s legitimate web site listing.

I calmly pointed out that if my client knew which web site she wanted to go to, she could simply type it in the address bar of the browser and go there – no searching necessary. She’s glad to have learned that.

What I can’t figure out is how in the heck AOL permitted this ad to be displayed in the first place. By having it up there, they are actively enabling those sleazebag “support agents” to run rough-shod over the typical older AOL user, who does not have a Managed Services Provider to answer her support phone calls.

It took 15 minutes to get through to an AOL Support rep. I’m hoping – after demonstrating exactly what we found – that AOL will take this ad down and pursue the bad actors in some way. Of course, that probably won’t happen…

Update 09/07/2017: AOL has removed this ad from the search results list. Probably the fastest action they have ever taken…

It is bad enough that the inhabitants of the greater Houston metropolitan area, as well as huge swath of Texas, have experienced one of the worst natural disasters to ever befall the United States. But now, just as the sun is beginning to shine on the Lone Star State, the lowest of the low have begun to crawl out on the internet to take advantage of their suffering.

Yep, that’s right. There are already dozens of sleazebag web sites and email campaigns out there attempting to cash in on unsuspecting Americans who want to donate to relief efforts after the devastating hurricane. It never ceases to confound me that there are such technologically gifted individuals who feel it necessary to enrich their thieving lives by creating bogus web sites.

According to leading security investigator Brian Krebs (https://krebsonsecurity.com), “The Federal Trade Commission (FTC) issued an alert on Monday urging consumers to be on the lookout for a potential surge in charity scams. The FTC advises those who wish to donate to stick to charities they know, and to be on the lookout for charities or relief web sites that seem to have sprung up overnight in response to current events.”

The advice that Krebs offers includes this helpful note. “The FTC also warns consumers not to assume that a charity message posted on social media is legitimate, and urges folks to research the organization before donating by visiting charity evaluation sites, such as Charity Navigator (https://www.charitynavigator.org/).”

I have taken a look, and the Charity Navigator web site has links to a handful of local Texas-based organizations that can directly use the funds if anyone wishes to donate. While I was there, I reviewed their rating of the Red Cross. I had to stop for a moment and say, “Wait, what?” Sure enough, they are not ranked high because their overall administrative costs are out of line with most other organizations. And, as I discovered with some additional research, the funds you donate on their site for this event may not necessarily be used for hurricane relief. Suffice it to say: You’ve been warned.